Senator Daniel K. Inouye was the second longest serving member of the U.S. Senate prior to his death, with a distinguished tenure of more than 49 years.  As president pro tempore from 2010-2012—third in line of presidential succession—Dan Inouye was the highest-ranking public official of Asian descent in United States history.

For his heroic actions as a member of the famed 442nd Regimental Combat Team—resulting in the loss of his right arm—the World War II veteran ultimately earned the nation’s highest award for military valor, the Medal of Honor. Senator Inouye was widely respected for his moral courage and his commitment to work in a bipartisan fashion to enact meaningful legislation.  He was called upon to serve as the first Chairman of the Senate Select Committee on Intelligence, member of the Senate Watergate committee, and Chair of the Iran-Contra Investigative Committee. He won admiration from all parties for his unwavering integrity.  As Chairman of the Senate Appropriations Committee, Senator Inouye focused on defense matters that would strengthen national security and enhance the quality of life for military personnel and their families.

Dan Inouye continuously represented Hawaii in the U.S. Congress since it achieved statehood in 1959, serving as Hawaii’s first congressman  before being elected to the Senate in 1962—the first Japanese American elected to both the House and Senate. Before then, he served in the Territorial House.  The senator depicted his journey in a 1967 book about his life, “Journey to Washington.” Throughout his career, Dan Inouye championed the interests of Hawaii’s people and left a lasting imprint through his efforts to strengthen Hawaii’s infrastructure, diversify its economy, and protect its natural resources.  He advocated for the rights of Native Hawaiians, Native Americans, Alaska Natives, and sought equal justice for Japanese Americans and Filipino World War II veterans.  He worked tirelessly for peace and stability in the Asia Pacific region and promoted efforts to build strong U.S. – Japan relations.  The senator was a stalwart supporter of Israel, knowing it was in America’s best interest.  Most important, he inspired confidence in those whom he touched, inspiring them to pursue their dreams with both determination and a healthy dose of optimism for the future. Dan Inouye is survived by his son Ken Inouye and his wife Jessica, granddaughter Maggie, and step-daughter Jennifer Hirano.

The Daniel K. Inouye Institute was established in 2013 to honor his legacy.  A program fund of the Hawaii Community Foundation, the Daniel K. Inouye Institute will work with affiliated organizations to preserve the senator’s papers and tell his life story, support STEM education and civics learning, encourage international educational-cultural exchanges, and support collaborations between national institutions and organizations in Hawaii to widely share the Asian American and Pacific Islander experience. 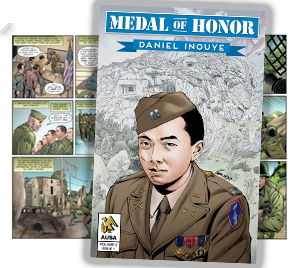 Read a graphic novel by the Association of the United States Army. 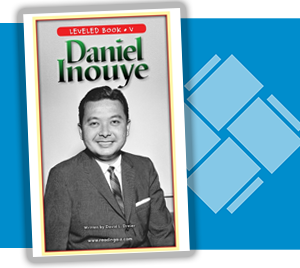 Read a biography and curriculum for students. The Institute’s logo is based on Senator Inouye’s interpretation of his Japanese family crest, or mon.